Masoule; a small village with many features 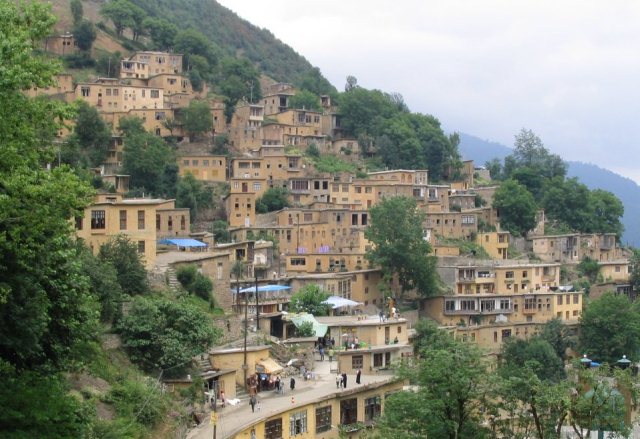 Masoule is a name always mentioned when a traveler is planning a trip to the northern parts of Iran. Although there are many interesting villages and small towns on the jungles of North and in other parts of Iran, Masoule is unique in many ways. Masoule is located 55 kilometers to the south west of Rasht in Gilan province. It is an hour drive on twisting roads through North beautiful jungles. After passing Fouman, you will arrive at the foot of a big hill covered with houses on one side and dense trees on the other. The first thing you will notice is that you have to get off the car and walk into the village. Cars can get into narrow alleys and step-like structure of the houses makes it impossible for vehicle to pass. As the village is built on a steep hill, a unique architecture is used for its construction. The houses form rows of huge steps and each house roof is the yard for the house in the upper row.  The two to four story houses are different in size but look quite the same regarding the architecture. The ancient village, believed to be 800 to 1000 years old, is located a few kilometers to the north. The ruins have been excavated and lots of archeological objects have been found. Despite the old appearance of the village and its size, it is so vibrant and there are various things to see.  There is an interesting small bazaar where you can shop some hand woven artifacts in addition to a variety of other more modern shops. The small museum of wild life in Masoule displays some taxidermy animals such as bears and squirrels.  Besides, there is an anthropology museum where you can see a number of tools and objects used by the local residents for many years.  After hanging around in narrow and steep alleys, you can stretch your legs in the traditional tea house and restaurant where you can taste some special service; cuisines from the North such as Baghali Ghatogh and Mirza Ghasemi. Trekking up the hill and into the woods is a common entertainment to smell the scent of trees and bushes.  If interested in climbing mountains, Masoule is the right place. The highest peak in Gilan province called Ghole Shah Moalem which is 3050 meters above sea level is located nearby. What’s more, picturesque and magnificent castle of Roodkhan (Qal e Roudkhan) can be accessed some 50 kilometers away on the way back to Fouman. Summer is the best time to visit.  It gets a bit deserted in winter because of the very cold weather but it can be visited from March to November when it is mostly chilly and wet. All in all, Masoule can give a small taste of everything; culture, nature and history.